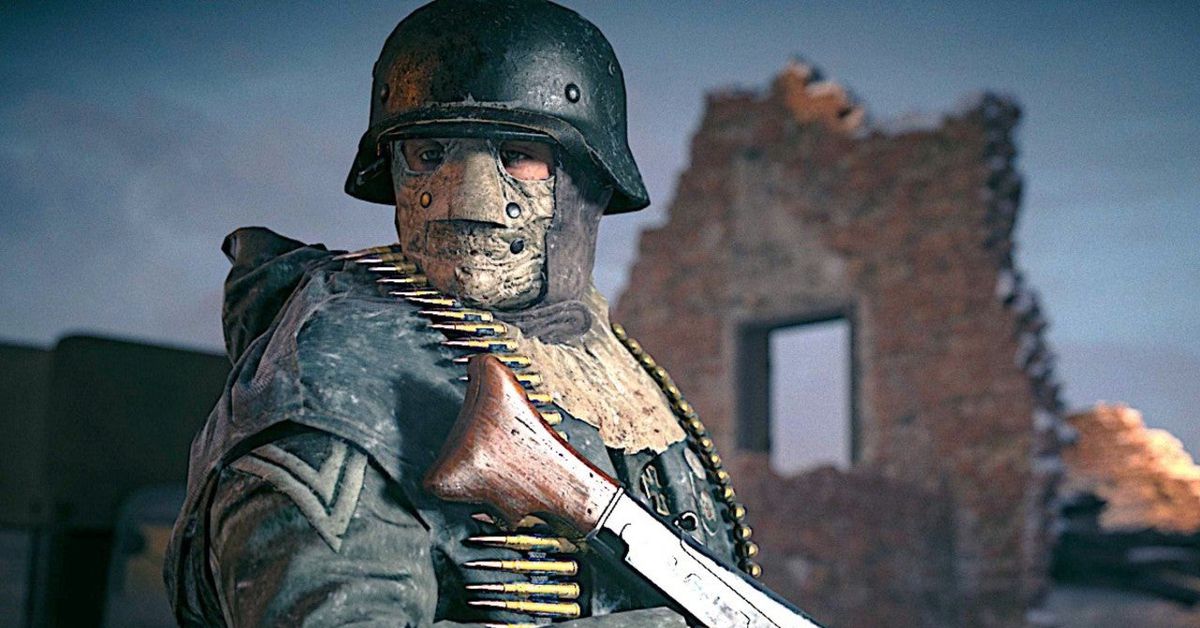 “This is real.” A war photojournalist murmurs this affirmation over a melancholy score in the latest promotional video for Call of Duty: Vanguard. A still of a soldier, huddled behind barrels with a gun in hand as fire licks away at a building behind him, is centered for emphasis. The image is a photograph taken through the use of Vanguard’s in-game engine. It is a demonstration of how Call of Duty: Vanguard will seek to completely immerse the player in yet another retelling of the events of World War II.

This is one of several videos created to emphasize how Call of Duty: Vanguard is aiming for “realism.” Its tagline — “World War II Like Never Seen Before” — appears over a hyper-realistic shot of soldiers running in slow motion over a muddied battlefield. It is a gamified, interactive version of one of the most costly events in human history, one the series has delved into a dozen times over. Activision promises it will be far more realistic than the last. This time, it will be real.

The video features two war photojournalists, Sebastiano Piccolomini and Alex Potter, who elaborate on their extensive backgrounds and portfolios. They introduce themselves, with real photographs taken in Syria, Iraq, Lebanon, and Afghanistan appearing in rapid succession. All of this occurs before they are given special handheld cameras that allow them to navigate Vanguard’s levels. They’ll photograph digital war zones within the game, trying to impose some semblance of reality on recreated environments.

The video is punctuated with flashing lights to emulate bullet fire as the photojournalists crouch inside a designated area in the center of a sound stage. More than a handful of images flicker by during the trailer: burning buildings, exploding tanks, the photojournalists themselves in bulletproof vests as though they were really there. At one point, the trailer lingers on an in-game paratrooper, caught in a tree, at what appears to be the moment before he’s killed or captured, while Potter’s camera continues to click. It all reads as an attempt to paint acts of war with a thick veneer of cool wrapped in the gritty realism that the Call of Duty series has continually strived for.

The trailer not only diminishes the intent and use of war photography, but further purports it as a tool of propaganda. While the modern use of war photography is contentious, with its original intent warped by interference from the American government, it once provided a look into the atrocities committed by various imperial powers — America included. Activision treats this history as something to be exploited in pursuit of “realism” for a franchise that is already entangled with the American military industrial complex in its use as a recruitment tool. It is a tasteless attempt at appealing to its most devoted player base (who are indeed more fixated on the historical inaccuracy of the weapons in Vanguard having laser sights), or those who are fascinated with World War II enough to jump into the series specifically for the voyeurism of it all.

Call of Duty has already crossed ethical lines before. In Call of Duty Modern Warfare alone, its designers used White Phosphorus as a multiplayer mechanic, and created a single-player mini-game out of waterboarding. There have been debates among the community about whether or not these realistic depictions of war and its atrocities are necessary for the experience of Call of Duty. Namely, does this pursuit of realism actually benefit anyone involved? Given that Call of Duty’s most popular modes — Zombies and its progression-oriented multiplayer modes — dive headfirst into the absurd, it makes the inclusion of legitimate acts of war, and by extension war crimes, feel superfluous. It was a boundary that didn’t need to be crossed, but was anyway, for the misguided sake of creating an authentic and legitimate experience in a video game based on acts of war.

Based on its marketing thus far, Vanguard feels like another step further in the same direction it embarked upon with “No Russian” in Call of Duty: Modern Warfare 2, and, really, since the first Call of Duty brought us to France and Stalingrad in 2003: a sort of inevitable disregard for the historical events the series has consistently rewritten for the sake of a more appealing experience. A “cooler,” newer, “more accurate” and immersive (down to adaptive controls with the DualSense controller) Call of Duty.

And we have to ask ourselves, when does it go too far? When does the blending of reality and fiction, the recreation and the use of real images and events, cross the line? Maybe it’s in the grisly acts of “virtual patriotism” depicted in single-player campaigns? Or maybe it’s in the constant distillation of what amounts to propaganda in its promotional material? Or maybe it’s how marketing warps history, like when Lt. Col Oliver North (notoriously involved in the Iran-Contra scandal) became a consultant and talking head for Call of Duty: Black Ops 2?

Perhaps it is all of the above. These things work in tandem to create Call of Duty as we now know it: a soulless and tasteless propaganda machine created by a company that refuses to acknowledge its hand in the American military industrial complex. Despite the bombastic visuals and the yearning for legitimacy with the inclusion of award-winning war photojournalists in its most recent promotional campaign, it continues to be impossible to recognize what Call of Duty stands for.