For years after the 2008-09 financial crisis, interest rates were so low that many investors argued that to get a decent return, you had to put a hefty chunk of your portfolio in the stock market. That conviction was so popular that Wall Street gave it a name: TINA, short for “there is no alternative” to stocks. Sure, the stock market was riskier than, say, government bonds that are guaranteed to pay out coupons every year. But returns on stocks were so much better than practically everything else in the markets that investors saw few viable alternatives for where to put their money.

The Federal Reserve has turned that dynamic on its head. The central bank, determined to rein in inflation, has begun what could be its most aggressive campaign of interest-rate increases since the 1980s. Investors expect the Fed to bring rates to around 3% by early 2023 from near zero at the start of 2022. Once-loved stocks, as a result, have tumbled to multiyear lows.

The shift is inflicting pain on markets and investors of all stripes as losses mount for hedge funds, day traders and the funds that manage more than $4.5 trillion in retirement savings for U.S. firefighters, police officers, teachers and other public workers. It is hurting startups that just a year ago had found an easy way to raise money. A growing list of companies trying to go public through SPACs, or special-purpose acquisition companies, have canceled their plans, citing market volatility. And traders of cryptocurrencies and nonfungible tokens, or NFTs, have also taken a drubbing this year as the Fed’s policy shift dented the allure of once-highflying risky investments.

Investors are moving their money out of stocks and into ultrasafe assets that had largely been unloved for the past decade—such as cash, Treasury bills, certificates of deposit and money-market funds. Investors put $51.4 billion in global money-market funds in the week through April 27, the most for a week since October, according to Refinitiv Lipper. During the entire month of April they yanked $19.2 billion out of stock exchange-traded funds—the biggest outflows since 2019, according to

in April said they had larger than average cash positions in their portfolios—the highest level since April 2020.

The good news for some of these investors is that conservative bets are now starting to provide more bang for their buck. Three-month Treasury bills are now offering a yield of around 0.97%, up from near zero for most of the last two years.

is giving holders of five-year certificates of deposit an annual percentage yield of 2.25%, and the Treasury Department’s inflation-adjusted I Bonds are making interest payments of 9.62% to investors for the next six months.

“There’s a lot of sitting on hands,” said

head of asset allocation Americas at

Global Wealth Management. Many UBS private-wealth clients are holding cash instead of trying to identify the market bottom, he added.

‘I don’t want to buy stocks’

If stocks were still rising the way they did the past several years, these alternatives would likely be of little interest to investors. After all, the S&P 500 delivered annualized returns of 17% over the past decade. But between investor worries about tightening monetary policy, inflation, and Covid-19 lockdowns and supply-chain disruptions slowing global growth, the stock market has had an indisputably grim year. 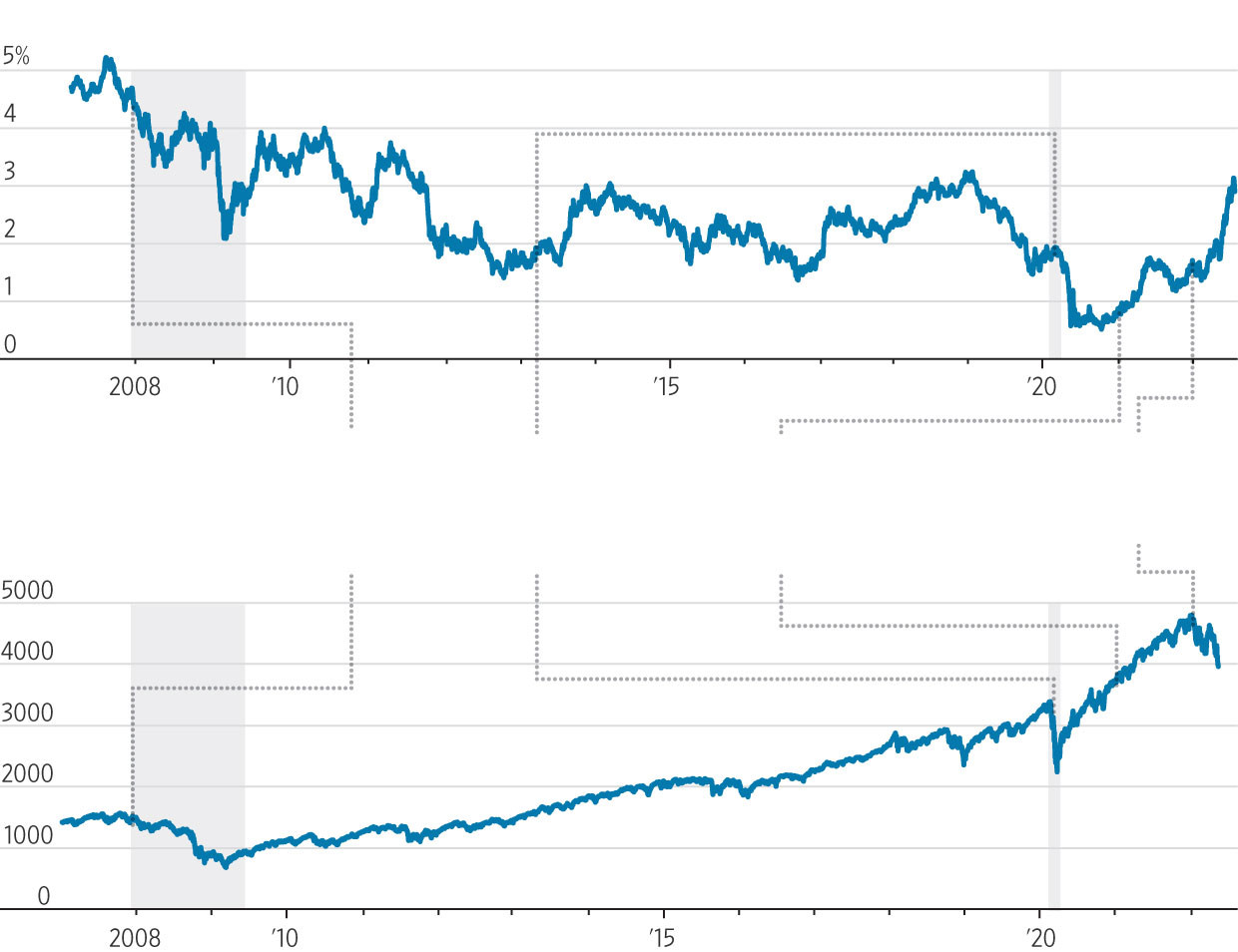 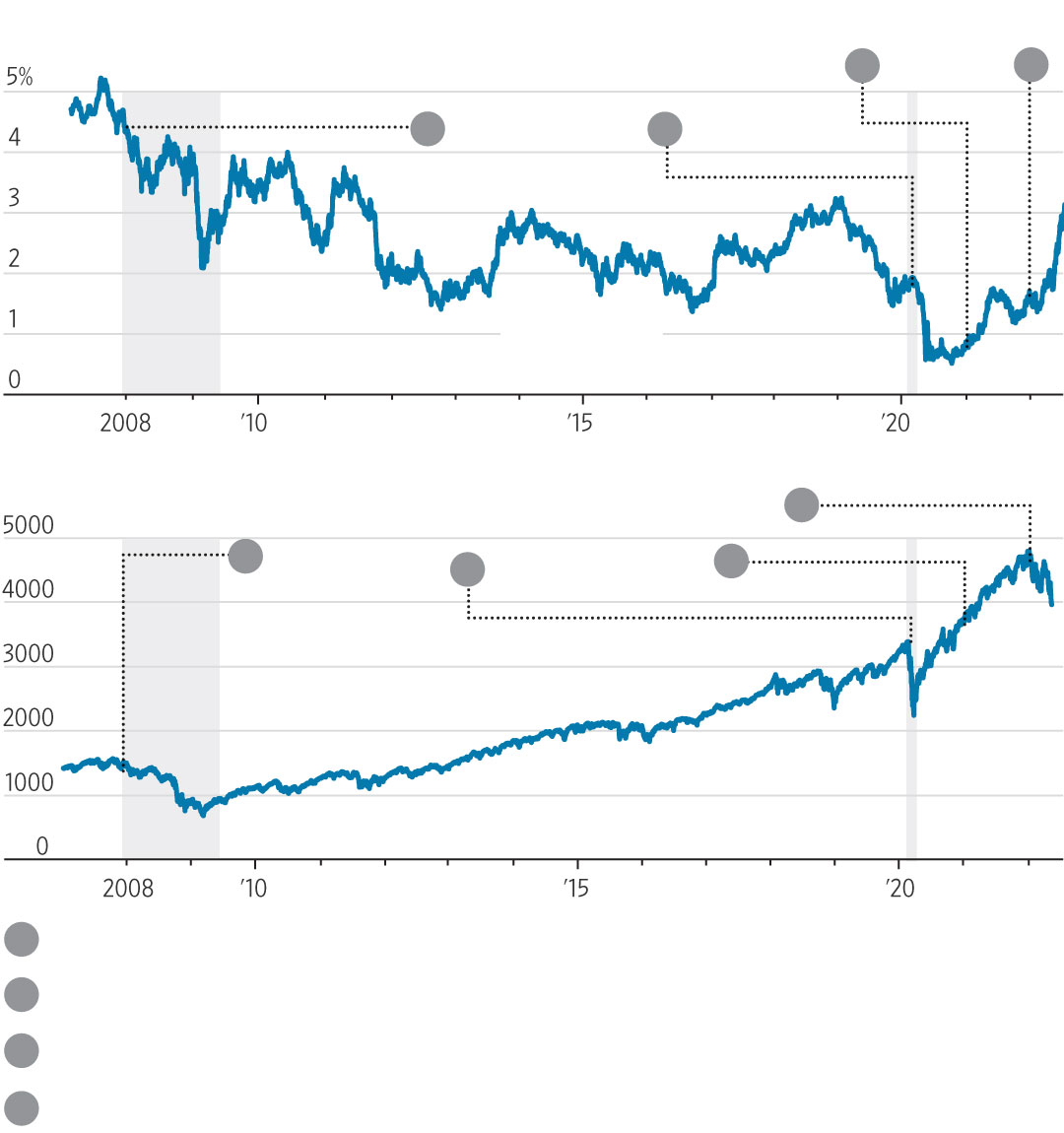 The S&P 500 is now down 16% in 2022—on course to deliver its worst return since 2008. Even bonds, which have been hit by their own brutal selloff, have managed to beat the stock market so far this year. The Bloomberg U.S. Aggregate Bond Index, which includes Treasurys, mortgage-backed securities and investment-grade corporate debt, has returned negative 9.4% in 2022.

What’s unusual about investors’ reactions is that, in the past decade, money managers typically were quick to swoop in after selloffs to pick up discounted shares—or in Wall Street parlance, to “buy the dip.” That helped keep stock drawdowns relatively short.

This time around, the market hasn’t gotten the same lift. The S&P 500 posted its sixth consecutive week of losses Friday, a streak last matched in length during the height of the 2011 European debt crisis. Many investors see the tumult as the consequence of the Fed finally winding down easy money policies that sent shares soaring and encouraged people to keep putting money into the stock market because they felt they had no other palatable choices.

One reason why stocks have struggled to make a comeback, investors say, is simple math. The S&P 500 has a dividend yield of around 1.5%. Amid this year’s tumult, the yield on the 10-year U.S. Treasury note is around 2.9%. The argument for holding stocks becomes less attractive when investors have an essentially risk-free alternative on their hands, Mr. Draho said.

Stock investors faced with rising interest rates and falling stocks have historically been rewarded by sticking it out in the market. For instance, the Fed raised interest rates in 1986 and 1987 to try to fight inflation. After stocks careened on Black Monday, the central bank immediately lowered rates again, helping stocks go on to produce double-digit percentage returns the following two years.

More recently, stocks fell in 2018 after the Fed raised rates and indicated it would continue to do so the following year. The central bank then wound up cutting rates three times—effectively taking away its 2018 rate increases—to try to give the U.S. economy a buffer from the trade war and slowing global growth. The S&P 500 once again rallied, rewarding investors with double-digit percentage returns in 2019, 2020 and 2021. Returns on cash and cash-like investments trailed well behind stocks over that period.

What’s given investors pause is the feeling that this time, the Fed may approach things differently. Many believe there is little chance of the central bank reversing course on its monetary policy tightening anytime soon, even if the market rout deepens substantially from here. That is likely to keep the TINA effect at bay for some time.

The Fed has indicated its top priority at the moment is to rein in price pressures. Data released last month showed the Fed’s preferred measure of inflation, the personal-consumption expenditures price index, rose in March at its fastest pace since 1982. Prices for everything from cars to groceries to gasoline have soared over the past few months, leading President

to declare inflation the economy’s biggest challenge in a speech Tuesday.

himself said restoring price stability would be “absolutely essential” at a panel hosted by the International Monetary Fund in April. “Economies don’t work without price stability,” he added.

The question many investors have: How long will it take for the Fed to get inflation under control? And how will markets fare in the meantime?

Wall Street analysts have sketched out a few ways the rest of the year could go.

In one scenario, the Fed pulls off what’s called a soft landing: cooling down the economy enough to get inflation back near its 2% target, but avoiding actually tipping the economy into a recession. That might help make stocks attractive again since corporate profits would remain strong, something that should encourage investors to place bets on publicly traded companies.

In a less upbeat scenario, the Fed’s interest-rate increases wind up putting the economy at the risk of recession. Bond yields should then fall, since they typically go down when investors are less optimistic about the economy and go up when they see higher growth and inflation in the future.

Would that revive the TINA effect?

analysts led by chief U.S. equity strategist David Kostin. For starters, corporate earnings would likely suffer. Going back to 1949, the median per-share earnings decline during a U.S. recession has been 13%, the team wrote in a research note. Stock prices would then likely fall further. The S&P 500 has had a median fall of 24% from peak to trough during past recessions, the team found.

The not-so-nice takeaway for investors may be that, after a long and unusually strong period for the markets, simply parking money in stocks likely won’t deliver the type of returns they got used to over the past decade.

RegentAtlantic’s Mr. Kapyrin is advising his clients to limit their exposure to bonds with long durations, which tend to be more sensitive to rate increases than Treasury bills, which have shorter maturities, ranging from just a few days to a year. He’s also recommending that, within the stock market, clients look past technology stocks and toward consumer staples companies, which have the potential to deliver steady earnings even in a volatile environment.

“When the Fed goes through this kind of process, there are very few places to hide,” Mr. Kapyrin said. “It’s no longer the market’s friend.”