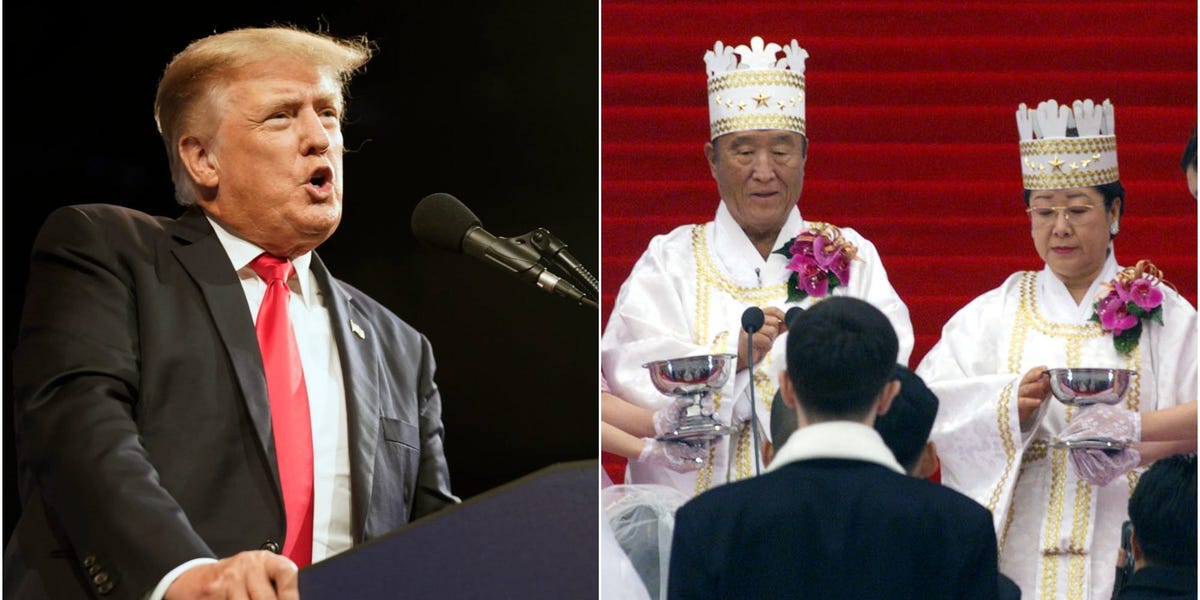 On Saturday, former President Donald Trump spoke at a conference organized by Hak Ja Han Moon, the widow of the Rev. Sun Myung Moon, who founded the Unification Church.

Moon founded the church in South Korea in 1954 before moving to the US in 1971, and the church has been widely described as a cult.

Trump was a featured keynote speaker at the Rally of Hope event, which coincided with the 20th anniversary of the September 11, 2001, terrorist attacks.

“I want to thank the Universal Peace Federation and in particular Dr. Hak Ja Han Moon, a tremendous person, for her incredible work on behalf of peace all over the world,” Trump said in his remarks.

“What they have achieved on the peninsula is just amazing. In just a few decades, the inspiration that they have caused for the entire planet is unbelievable, and I congratulate you again and again.”

Moon, who died in 2012, called himself a messiah and said he had been asked by Jesus Christ to continue Christ’s work on earth.

The controversial church, whose followers are colloquially referred to as Moonies, gained attention for arranging mass weddings between strangers.

The group is still active around the world.

In his speech, Trump also took the opportunity to take credit for improving the security situation in the Korean Peninsula.

“Looking back today, it’s easy to forget how dangerous the situation was when I was elected,” Trump said.

“Missiles were flying, nuclear weapons were being tested, and powerful threats were being issued every single day.

“Under my leadership, the United States adopted a policy of unprecedented strength.”

Jim Stewartson, the founder of the anti-disinformation organization The Thinkin Project, wrote on Twitter that the event was “deeply harmful and deceptive.”

“This is being pitched by a who’s who of establishment extremists as some sort of peace mission to unify Korea,” Stewartson wrote.

Those who have left the group, including one of the Moons’ daughters, have described experiencing abuse during their time in the church.

In a blog post, Steve Hassan, a former member of the church who is now a cult expert, described how the group indoctrinated members.

Hassan added on Twitter that the group had long-established ties with Trump and the modern Republican Party.

In 1991, Trump was reported to have been considering selling his Florida resort Mar-a-Lago to the Rev. Moon, but the church leader later denied being interested in the property.

Other high-profile GOP figures, including the former vice presidents Mike Pence and Dick Cheney, have also spoken at events organized by the group.

Hyung Jin “Sean” Moon, the son of the Moons, campaigned for Trump and attended the Capitol insurrection on January 6.

He also formed an offshoot church called World Peace and Unification Sanctuary Church in Pennsylvania, which has made MAGA politics a central tenet.

The group famously worships while carrying AR-15 rifles and has a 40-acre compound in Texas that it says is a safe haven for “patriots.”