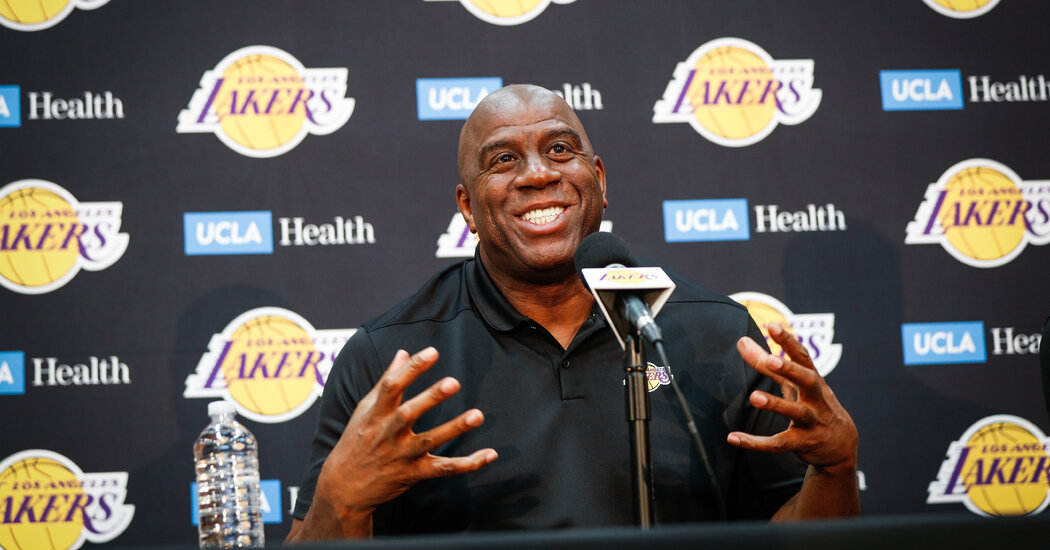 Many modern athletes envision their legacies expanding beyond the playing fields, seeing themselves building companies and improving communities. Magic Johnson helped pioneer that mentality, carving out a business empire following the end of his N.B.A. playing career.

“It was just a natural for me to go back in the community that I grew up in to bring about change, to build businesses, to create jobs for people,” Johnson said during a recent telephone call. “What was missing right in the Black community was really quality product services and goods.”

Johnson cited players like LeBron James, Kevin Durant and Stephen Curry as current players carrying on his legacy of inspiring others on and off the court.

Johnson served as an unofficial N.B.A. ambassador for most of his adult life by propelling the league into the mainstream through his rivalry with Larry Bird and the Boston Celtics in the 1980s and by helping to spread the game globally as a member of the Dream Team at the 1992 Summer Olympics.

Now, that title is official with the N.B.A. choosing Johnson, Clyde Drexler, Dirk Nowitzki, Bob Pettit and Oscar Robertson to represent different eras as it celebrates its 75th anniversary throughout the 2021-22 season.

Johnson, who abruptly left his role as the president of basketball operations for the Los Angeles Lakers in 2019, will also return to ESPN this season as a commentator on “NBA Countdown.”

He recently spoke to The New York Times about the state of the game, this era of player empowerment and his singular regret from his tenure running the Lakers.

This interview has been condensed and lightly edited for clarity.

Will the N.B.A. ever have true rivalries again, like when the Lakers seemingly faced the Celtics every year in the 1980s?

I think you’re going to see the more the Knicks and Nets play, it can become one, right? Because now Brooklyn is a championship team. The Knicks are a playoff team. And so you will see that. So what happens is you got to be good at the same time. There’s got to be a real hate toward each other.

When we used to see Philadelphia against Boston, Dr. J [Julius Erving] and Larry Bird, Chicago against Detroit, Isiah Thomas, Bad Boys against Michael Jordan’s Bulls, there was a real dislike for each other. So I think we’re starting to create some of these rivalries. I don’t know if it ever gets to the level of the Lakers-Celtics, but at least if we get it to some type of rivalry, it’s going to be good.

A large part of your legacy is the work you’ve done off the court in low-income communities as a businessman. What have you learned about working in those communities, and what are some of the mistakes you’ve seen from large corporations trying to make the same inroads?

So, retail has made a mistake in thinking they couldn’t make money in the Black community. And sure enough, we proved that wrong with the Magic Johnson Theatres. We proved it wrong with the Starbucks. That’s why you see big retailers going into urban America more now than ever, because they know they can get a return on investment.

They look to also do some good within our community. I always say, you can do well and do good at the same time. When the whole George Floyd situation happened, in terms of he was murdered, you saw a lot of Fortune 500 companies — because young people were out there protesting. But it wasn’t just Blacks — it was also whites and other groups of people. That’s when everybody said: “That’s wrong. I got to do something. Let me invest in urban America.”

A lot of C.E.O.s called me and said: “Earvin, we want to do something. We quite don’t know what to do.” I said, “Well, No. 1, you could put money into small Black banks because the Paycheck Protection Program did not trickle down to Latinos, small business owners, Black small business owners, or women business owners. So if these banks had money, then they could actually make loans to these entrepreneurs or to those who want to buy a home for the first time in the Black community. Now they got more cash to provide more loans, right?” So a lot of them did that. Then I said, “Hey, your board must reflect America, so you got to hire more people or bring more people on your board and also on the management and the C-suite level, you got to put more minorities on that level.”

Are you interested in ever running an N.B.A. franchise again?

I had offers before to own some of those teams and then I turned those offers down. But again, I love the game so much. I know the game. I know players. I know agents. The great thing about me, I’m set up where I know what works. I know what a winning and championship team looks like. So I know how to talk to the players — you can ask Julius Randle and Lonzo Ball and all those guys, because I’m happy to see them thriving and doing so well, and so just trying to help those guys reach their full potential. That was my role, and then you see them reaching it. So it was really good to see that.

Is there anything you would have done differently during your time running the Lakers?

No, I had a plan. We were over the salary cap. I had a plan to get us up out of the salary cap. We did that. I had to make tough decisions. Julius was coming up. I know Larry Nance Jr. was coming up, so we had to make tough decisions that worked out for them, but also worked out for the Lakers. So I couldn’t sign them to those extensions because I knew LeBron was coming up and Kawhi Leonard and all these guys, so I was trying to save enough of that cap space, so I could sign one of those superstars, because you have to have a superstar to win a championship. So, we did it right.

LeBron James came to Los Angeles late in his career. What can he do to climb the ranks of as one of the greatest Lakers?

You know the answer to that: Just win. He’s got to win another one. The Laker fans already love him. He’s already brought us one. He’s already got his jersey, it’ll be hanging up, but most of the guys who’ve been with the Lakers have won multiple championships. So, that’s all he has to do. Just win another one. Then it’s not just about the Lakers. It’s all about his legacy here, and it’s not just here — it’s in Hollywood. LeBron, he’s so amazing, not just as a basketball player, but he’s the biggest celebrity in a celebrity-driven town. So you got to give him credit for that too, as well.