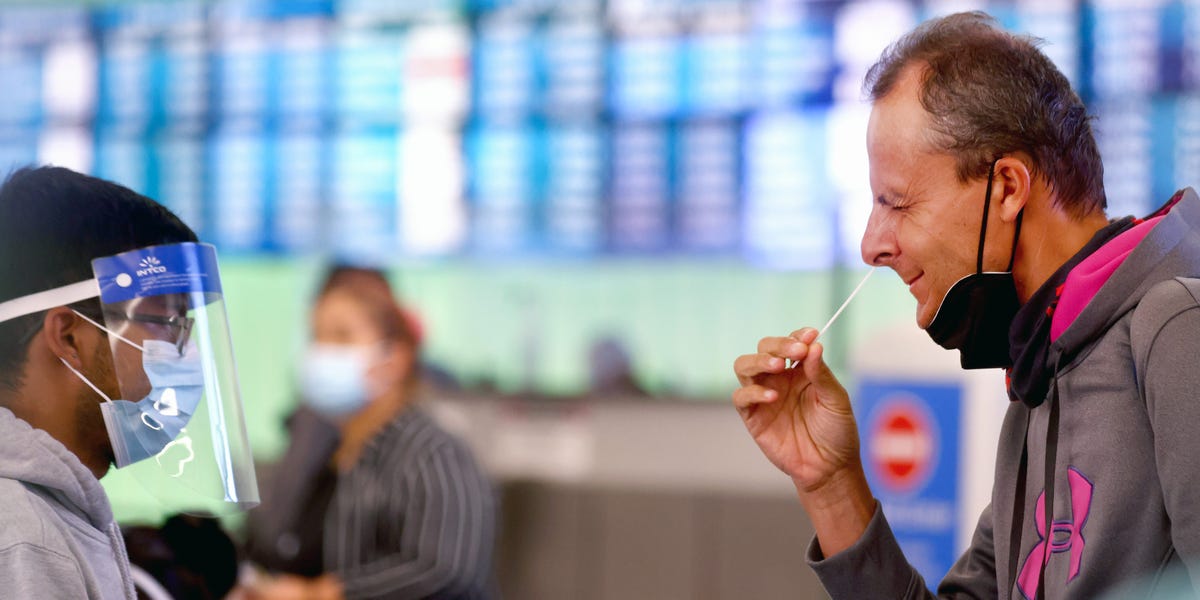 The first data on Omicron symptoms in the US is starting to trickle in. The data is an early sign that vaccines are continuing to do their job of warding off severe illness, though it points to the possibility that mild coldlike infections may be easier to catch for vaccinated people.

On Friday, the Centers for Disease Control and Prevention released a report on the first 43 Omicron cases confirmed across 22 US states. The cases were by and large mild. One person was hospitalized and discharged after two days.

“The most commonly reported symptoms were cough, fatigue, and congestion or runny nose,” the CDC said.

But the sick did include many vaccinated adults and those who received boosters. (The hospitalized patient was vaccinated.)

Of the 43 included in the report:

The majority of people in the report had a cough (33), and more than half had fatigue (24) or congestion or runny noses (22). Fever, nausea, vomiting, shortness of breath, and diarrhea were also reported but far less commonly. Just three people lost their taste or smell, a symptom associated with earlier coronavirus variants.

That coldlike-symptom profile generally mirrors what other early reports have uncovered in both the European Union and the UK.

‘Most people will have thought they had a bad cold,’ a UK researcher said

Europe has identified 337 Omicron cases across 21 countries. Each of the cases has been either asymptomatic or mild, and no Omicron deaths have been reported, the European Centre for Disease Prevention and Control said on Wednesday in its latest update.

In the UK, the Zoe COVID-19 symptom tracker, which uses a smartphone app to log how hundreds of thousands of people are feeling every day across that country, has recorded a trend of more mild infections among vaccinated and boosted adults with Omicron.

While Delta still accounts for more than 95% of sequenced cases in the UK, Tim Spector, the principal investigator of the Zoe COVID Study, said he was already seeing signs that Omicron was around and spreading.

Spector described one recent “superspreader” event, likely tied to Omicron, at a 60-year-old’s birthday party. There, all 18 people were vaccinated, and many were boosted. Even though a good chunk of the partygoers took rapid COVID-19 tests beforehand, one later tested positive, and within just a couple of days, 15 others who’d attended the party did, too.

“It’s highly unlikely that Delta would behave like that,” Spector told Insider. “Even if you’re double or triple vaxxed, it’s still not preventing infection.”

The UK Health Security Agency, likewise, said that Omicron was “displaying a growth advantage” over Delta and that the new variant was “likely to outcompete Delta in the UK and predominate.”

Spector said that meant it’d be much harder to test and trace this variant and that “the timing has to be just right” for tests.

“We’ve got to be sensible,” he said. “Nearly everyone’s going to get this.”

He added: “Most people will have thought they had a bad cold.”

No one in the UK has been hospitalized or died as a result of a confirmed Omicron infection.

Scientists aren’t sure whether Omicron on its own causes less severe disease than Delta.

“I actually think that’s nonsense,” Vaughn Cooper, the director of the Center for Evolutionary Biology and Medicine at the University of Pittsburgh, told Insider.

A more likely explanation, Cooper and many other scientists said, is that more people have some degree of immunity against the virus — either through vaccination, natural infection, or some combination of the two — that results in milder symptoms.

“I think it’s entirely because it’s infecting people that have already seen a coronavirus just like it before,” Cooper added.

So disease experts have cautioned against making too many predictions about Omicron’s severity, especially since the variant makes up less than 1% of sequenced coronavirus cases in Europe and the US.

“We’ve only seen a few Omicron patients in the Bay Area,” Bob Wachter, the chair of the Department of Medicine at the University of California, San Francisco, told Insider. “What we’ve seen so far is the same experience as everybody — milder cases than Delta, but the numbers are so small that we can’t make much sense of it.”

The more Omicron spreads, the more likely it is that hospitalizations and deaths will tick up, since more people — including unvaccinated people — will get infected. Scientists suspect Omicron is more transmissible than other coronavirus strains, and early lab studies suggested it was better at evading antibodies from two doses of Pfizer’s vaccine than the original version of the virus was.

“Even if most infections are mild, a highly transmissible variant could result in enough cases to overwhelm health systems,” the CDC said in the report.

The CDC said that given how easily vaccinated people seemed to be infected with Omicron, booster doses were an urgent need for everyone at higher risk of severe COVID-19, including residents at nursing homes and long-term-care facilities.

For now, the CDC still recommends its tried-and-true coronavirus-fighting strategies against Omicron: get vaccinated, get boosted, wear a mask, improve ventilation, test, quarantine, and isolate cases.