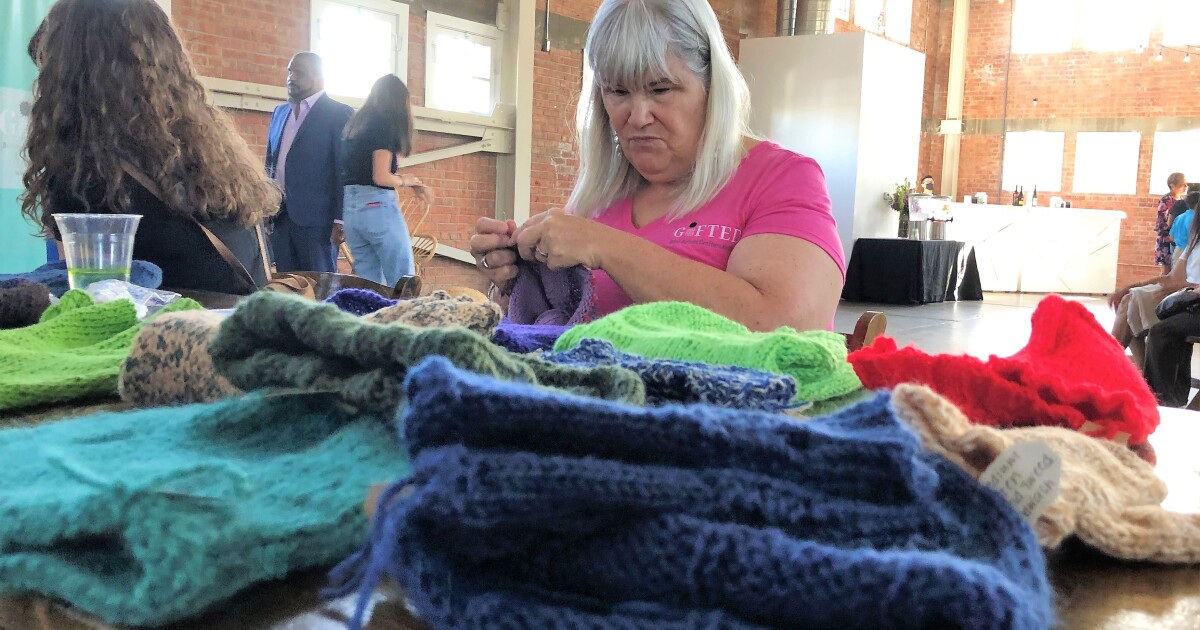 Marianne Mesa has been blind since birth, but that’s rarely been an obstacle for the Point Loma resident. For 23 years, she and her husband had a sheep farm, where she would hand-spin the animals’ wool to knit into hats that she donated to cancer patients and to troops in Afghanistan to wear under their helmets on cold nights.

Now, for the first time, Mesa can sell her hand-knitted hats, mittens, baby clothes and blankets to the public on the new e-commerce website called GiftedBack.com. Launched Sundaywith a kickoff party at Liberty Station, Gifted Back — “Back” stands for Blind Artists Crafters Knitters — showcases the arts and crafts of San Diego blind and visually impaired artists.

Mesa, who moved to San Diego last year from Chelsea, Mass., to live closer to her children, said she’s looking forward to sharing her knitting with the public.

“It’s not about the money. I do it because I love it, but I enjoyed meeting the other artists, and I’m excited to see how things will go,” she said.

Mesa is one of seven San Diego artists featured on the website, but Gifted Back founder Pearl Mecenas hopes to recruit many more in the coming months and years. Mecenas worked with the Blind Community Center, San Diego Center for the Blind and Braille Institute to recruit artists who would like to market their products, which include blankets, hand-made gift cards, ceramic rose bouquets, paintings, books and other gift items.

Mecenas came up with the idea for Gifted Back about 10 months ago. It was inspired by her husband, Dr. Eshwar Kapur, and the volunteer work he does with the the blind and visually impaired in India. Four years ago, the San Diego couple were traveling in India and met Bhumika Patel, the founder of Guide Runners India, which trains and empowers the blind and visually impaired to compete in running events. An avid and lifelong runner, Kapur signed up to serve on Guide Runners India’s executive committee. He also serves as a remote counselor and trainer.

Mecenas has worked for the past 20 years as a business and health-care consultant, most of them with Kaiser Permanente. But after seeing the work her husband was doing to improve people’s lives, she decided to apply her business and marketing skills in a more philanthropic direction. Gifted Back isn’t a nonprofit but a limited liability company. For all products sold, the artists receive 60 percent of proceeds, and Mecenas collects the rest to cover the operating expenses, which include offering optional gift-packaging services for items purchased on the site.

Most of the artists in Gifted Back said they’ve never sold their products before, so any sales they make will be a plus in their lives. According to the American Federation for the Blind, just 39 percent of Americans with vision loss ages 16 to 64 are participating in the labor force. Barriers to employment include transportation, but Gifted Back allows them to all to do all their work from home.

South Bay resident Jennifer Finlan worked as a dental technician before she lost her sight during a surgery in 2012. Three years later she signed up for art classes at the Braille Institute and then took two more semesters of art classes at Southwestern College. She paints watercolors and makes ceramic floral bouquets that she shapes by hand from clay.

“This is my work now,” Finlan said, while pressing petals from colorful modeling clay at the kickoff event Sunday. “It’s fun, and I love it. I want people to know that we can do everything sighted people can do. We just do it our own way, and take it one day at a time.”

Joyce Porter, a 46-year resident of Spring Valley, said she was 7 years old when she started drawing and painting. She gave up art when she lost her sight at age 28. Then, 11l years ago she learned how to knit at the Braille Institute. Her specialty is making large yarn blankets, a craft she devotes up to 10 hours each day.

“I hope the website does well and I hope people appreciate the art we’re creating, because it is a gift,” Porter said.