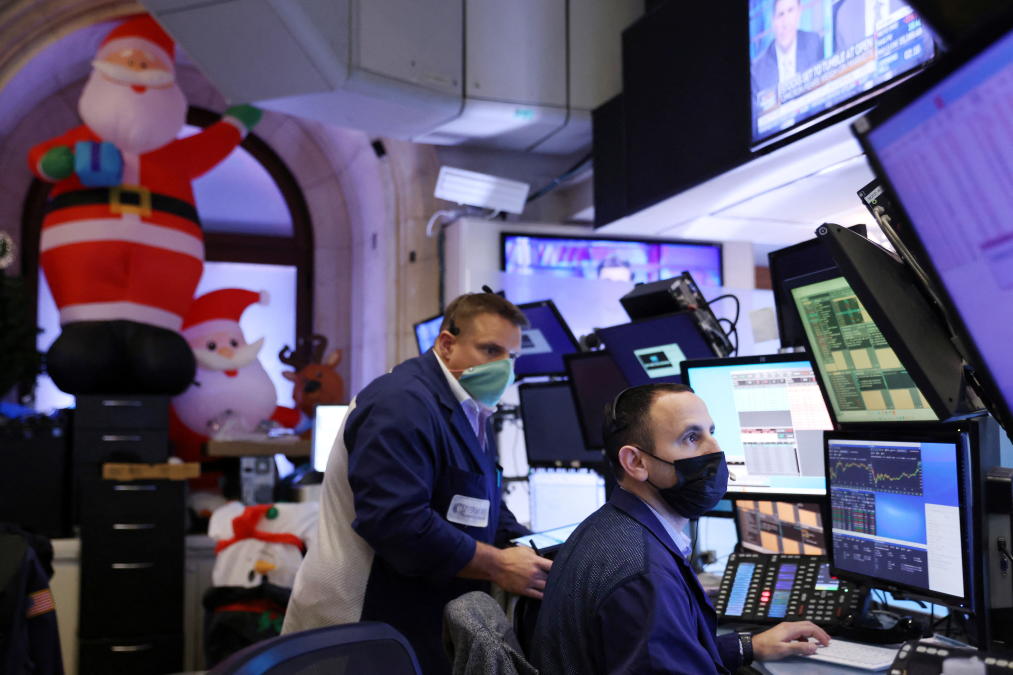 The S&P 500 closed at a record on Thursday in a pre-holiday rally along with the Dow and Nasdaq, buoyed by positive data that suggested the Omicron variant was less likely to lead to hospitalizations. The indexes recouped losses from earlier this week after investors shrugged off worries the variant would stunt economic recovery.

“One of the ways pandemics end is significant mutation of the virus. It looks like Omicron may be our friend in that regard, significant mutations different enough from the parent that it doesn’t make people as sick,” True Health Initiative President Dr. David Katz told Yahoo Finance Live.

In other positive news on the COVID-19 front, Merck (MRK) received authorization from the U.S. Food and Drug Administration for its at-home COVID-19 drug, just one day after Pfizer (PFE) was also approved for use of its own treatment.

Investors weighed a trove of economic releases ahead of the holiday weekend.

The Labor Department reported that initial jobless claims totaled 205,000, sustaining a downward trend from the highs of their pandemic peak and reflecting labor market tightness brought on by a demand for workers heading into the new year. The latest print brings the four-week moving average for new claims to its lowest in 52 years, ticking up by 2,750 week-over-week to reach 206,250.

Meanwhile, U.S. consumer prices accelerated at the fastest pace in nearly four decades as shoppers confront rising inflation levels ahead of the holidays.

“Workers have a lot of power, and that’s likely to result in continued wage gains,” Girard chief investment officer Timothy Chubb told Yahoo Finance. “What worries us from an inflation standpoint is, at what point do we potentially see some of those inflation risks sort of hand the baton to the labor market?”

Meanwhile, November sales of new U.S. homes jumped 12.4% to a seven-month high of 744,000, buoyed by low mortgage rates and higher demand in the housing industry.

U.S. durable goods orders rose by 2.5% in November, up from the prior month, boosted by a sharp rise in aircraft orders.

In Wednesday’s trading session, investors weighed an upbeat print on consumer confidence levels and the release of an upwardly revised estimate for domestic GDP, placing all three major averages in the green after a mixed open.

The Conference Board reported consumer confidence increased by a greater-than-expected margin in December, with the headline index at 115.8 during the month and higher than Bloomberg’s consensus estimates of 111.0. In November, the index had a reading of 111.9, revised from an initial report of 109.5. Meanwhile, the nation’s gross domestic product grew at an annual rate of 2.3% in the third quarter in the final estimate from the Bureau of Economic Analysis after the initial report of 2.1%.

“We’ve been saying that this is definitely a buy the dip sort of market because we expect more earnings upgrades to come,” Anik Sen, PineBridge Investments global head of equities told Yahoo Finance Live. “We think that the real debate should be about the length and strength of the economic cycle ahead.”

Thursday’s market gains may be the start of the year-end Santa Claus Rally — one in which stocks climb higher in the final seven trading sessions of a year, plus the first two trading days of the new year. Starting today, traders are looking to see whether nearly a century of data will uphold.

For reasons unclear, over the past 92 years, the S&P 500 gained 77% of the time during the year-end rally period, according to data from Sundial Capital Research. The average gain in this nine-day trading period tallied 2.66%.

Here were the main moves as markets closed ahead of the Christmas weekend:

Here were the main moves during intraday trading:

Here were the main moves in markets at open Thursday morning:

U.S. consumer prices accelerated at the fastest pace in nearly four decades. The Commerce Department reported an increase of 5.7% over the past 12 months, reflecting the fastest gain in 39 years as shoppers confront rising inflation levels ahead of the holidays.

Meanwhile, personal spending rose 0.6% in November, a slowdown from last month’s print of 1.4%. The figure, which accounts for 70% of economic activity, comes amid the latest wave of COVID-19 cases, hinting at the possibility of a broader economic slowdown.

Personal incomes rose 0.4% in November, down slightly from the 0.5% increase in October.

U.S. durable goods orders rose by 2.5% in November, up from the prior month, boosted by a sharp rise in aircraft orders.

Core capital goods orders, a measure of business investment in equipment that excludes aircraft and military hardware, fell 0.1% after an upwardly revised 0.9% increase in October, according to Bloomberg.

The median Bloomberg estimates projected a 0.7% increase in core capital goods orders and a 1.8% rise in total durables bookings.

Initial jobless claims remained at pre-pandemic lows, sustaining a downward trend from the highs of their coronavirus peak and reflecting labor market tightness brought on by a demand for workers heading into the new year.

The Labor Department reported on Thursday that new initial jobless claims totaled 205,000 for the week ending December 18, on par with consensus estimates. The latest print brings the four-week moving average for new claims to its lowest in 52 years, ticking up by 2,750 week-over-week to reach 206,250.

“The direction in the labor market recovery remains positive, with demand still strong,” Rubeela Farooqi, chief economist for High Frequency Economics, wrote in a note. “Labor shortages are persisting, preventing a stronger recovery, although these appeared to ease somewhat in November.”

Here’s how markets were moving in early trading on Thursday:

Here’s how markets were moving in late trading on Wednesday: