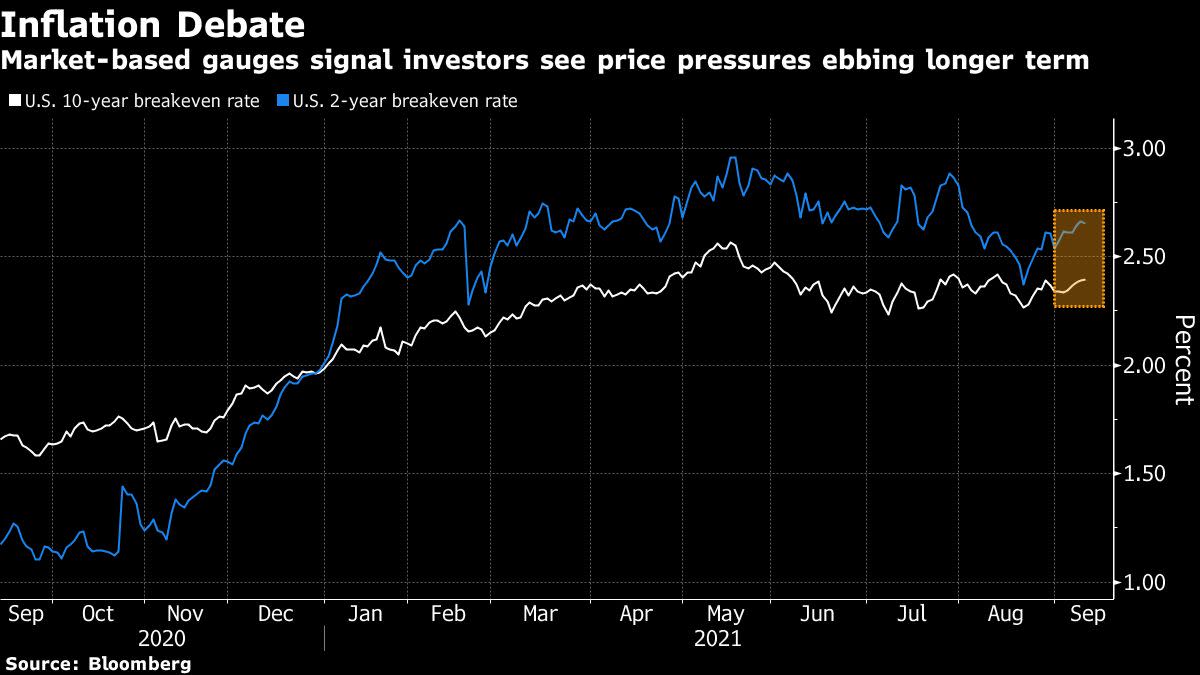 (Bloomberg) — European shares and U.S. futures climbed ahead of critical U.S. inflation data that traders will use to assess expectations about the timing of stimulus withdrawal and interest-rate hikes. The dollar edged higher and Treasury yields was little changed.

Contracts on the S&P 500 and Nasdaq 100 advanced after the indexes ended last week in the red. Energy companies led gains in the Stoxx Europe 600 gauge as oil prices extended a rally. Industrial metals rose as supply disruptions continued, with aluminum reaching $3,000 a ton in London for the first time in 13 years.

“That number will be the main highlight of the week as we approach a second half of September that will be full of politics,” Jim Reid, a credit strategist at Deutsche Bank AG in London, wrote in a note on Monday, citing the upcoming German election and U.S. debt ceiling deadline.

A Hong Kong gauge of Chinese tech names tumbled after a report that officials are seeking to break up Ant Group Co.’s Alipay. China’s online platforms have also been told to protect the rights of workers in the so-called gig economy. MSCI Inc.’s Asia-Pacific index retreated for the third time in four sessions.

Global stocks have been buoyed this year by robust earnings reports and a rapid recovery from the pandemic-induced recession. With valuations stretched following the non-stop rally, sentiment soured over the past weeks, amid concerns that economic growth may stall as the delta variant of the coronavirus disrupts the anticipated return to normalcy, while inflation remains sticky. Data on Tuesday may show consumer prices in the U.S. moderated in August.

Meanwhile, President Joe Biden’s $3.5 trillion tax-and-spending plan faces challenges. Democrat Senator Joe Manchin has cast doubt on the timeline for pushing Biden’s economic agenda through Congress, and proposed tax rates may be watered down to boost the chances of the package being passed.

In the latest tapering comments, Federal Reserve Bank of Philadelphia President Patrick Harker said he’s supportive of moving toward a tapering process “sooner rather than later,” according to a report.

Chinese tech names came under pressure after a report that officials are seeking to break up Ant Group Co.’s Alipay and as online platforms were told to protect the rights of workers in the so-called gig economy.

Elsewhere, North Korea ratcheted up tensions on the Korean Peninsula with a missile test.

Here are some events to watch this week:

Some of the main moves in markets:

Subscribe now to stay ahead with the most trusted business news source.