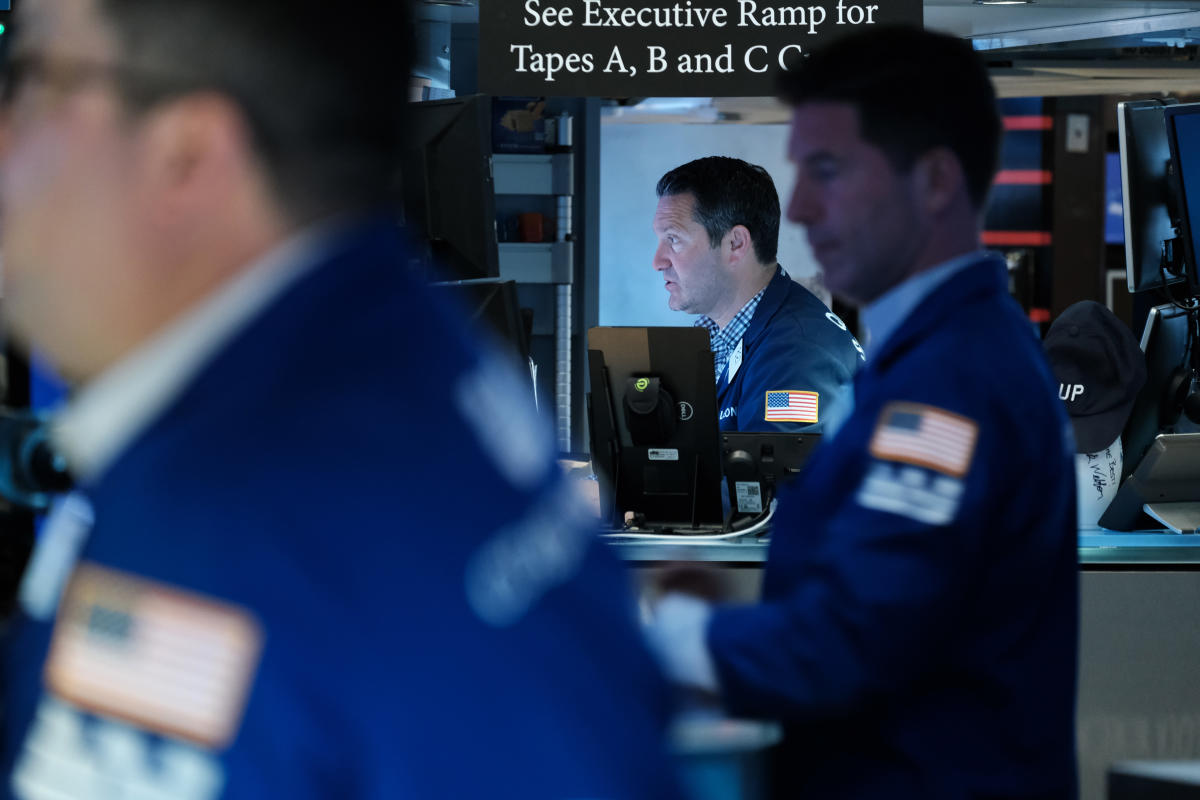 U.S. stocks plummeted Tuesday, accelerating this month’s sell-off on Wall Street as investors weighed a flurry of corporate reports against a backdrop of inflationary pressures and concerns over an economic slowdown.

The S&P 500 fell 2.8% to cap the session, while the Dow Jones Industrial Average shed 800 points, resuming losses after the index briefly recovered on Monday. The tech-heavy Nasdaq Composite tumbled nearly 4%, logging its third biggest drop of the year and marking its lowest close since December 2020. Meanwhile, U.S. Treasury yields retreated, with the 10-year benchmark falling to 2.7%.

“I do think this is going to continue to be a market where we might have one step forward, two steps back in terms of absorbing some of the headlines that we’re seeing,” JP Morgan Asset Management Global Market Strategist Meera Pandit told Yahoo Finance Live.

April has historically been a strong month for stocks, and has produced a positive return for the S&P 500 in 15 of the last 16 years, LPL Financial’s Ryan Detrick pointed out in a note earlier this month. This month, however, markets were wrought by Russia’s war in Ukraine, continued worries around the Federal Reserve’s rate hiking cycle, inflationary and supply chain pressures, and fears the culmination of these headwinds may result in an economic slowdown.

“We are seeing signs that growth is slowing, and there is talk of a recession in the next year or two,” Brad McMillan, Chief Investment Officer for Commonwealth Financial Network, said in an emailed note, adding however that what we have seen is a “typical, if sharper than usual, market cycle.”

“In the short term, it is painful, but in the longer term? It really doesn’t mean much,” McMillan said. “As long as the economy is basically healthy (which it is) and as long as policymakers are on top of things (which they are), companies will keep growing and making money.”

Investors are in the heart of earnings season, with the S&P 500’s most heavily-weighted components scheduled to report earnings results this week.

“The lower earnings growth rate for Q1 2022 relative to recent quarters can be attributed to both a difficult comparison to unusually high earnings growth in Q1 2021 and continuing macroeconomic headwind,” John Butters, a FactSet senior earnings analyst, said in a note.

U.S. stocks paralleled movements in global equity markets to start the week, with major stock indexes in Europe and Asia largely falling on renewed concerns a COVID outbreak in China may spur another wave of lockdowns and further disrupt global supply chains.

“I think the most interesting thing happening in China right now is not that the yuan’s moving and not that the economy’s slowing – it’s that everything that’s happening right now, we knew weeks ago,” China Beige Book CEO Leland Miller told Yahoo Finance Live. “We knew that the economy was slowing, we knew they were not going to stimulate in a big way, we knew that lockdowns were spreading from Shanghai to other big cities, we knew the Fed was hiking, we knew there’s a policy crackdown, so it is interesting that people are seeing today as a pivotal moment.”

Elsewhere in markets, shares of Twitter fell 4%, one day after the social media giant formally announced on Monday that it agreed to be acquired by Tesla CEO Elon Musk for $54.20 per share, or $44 billion. Twitter shareholders are set to receive $54.20 in cash for each share held, representing a 38% premium over Twitter’s closing level on April 1.

Here were the main moves in markets at Tuesday’s close:

Here’s where the main indexes were at the start of trading on Tuesday:

Home price growth in the U.S. accelerated during the month of February, but a slowdown may be underway.

Standard & Poor’s reprted Tuesday that its S&P CoreLogic Case-Shiller national home price index registered a 19.8% gain during the second month of the year, up from 19.1% in January. The figure marks the third-highest reading since the index was developed in the 1980s.

The 20-City results were higher than analysts’ expectations of an 19.2% annual gain, according to Bloomberg consensus estimates.

“The macroeconomic environment is evolving rapidly and may not support extraordinary home price growth for much longer,” said Craig J. Lazzara, managing director and global head of index investment strategy at S&P DJI, in a statement. “The post-COVID resumption of general economic activity has stoked inflation, and the Federal Reserve has begun to increase interest rates in response.”

“We may soon begin to see the impact of increasing mortgage rates on home prices,” he added.

PepsiCo (PEP) reported higher than expected quarterly earnings of $1.29 per share, beating the $1.23 per share analysts had expected, according to Bloomberg consensus data.

The beverage and snacks maker also raised its full-revenue forecast, buoyed by higher prices and a rebound in demand for its sodas at theaters and restaurants. Pepsi now anticipates fiscal 2022 organic revenue to rise 8%, compared with its forecast of a 6% increase.

During the quarter, the company also reported taking a $241 million charge related to Russia-Ukraine crisis.

“Looking ahead, we will focus on controlling what we can, such as enhancing our focus on productivity and sharpening our revenue management capabilities, while also continuing to make the necessary long-term investments to fortify our businesses and win in the marketplace,” PepsiCo CEO Ramon Laguarta said in the earnings release.

Shares of Pepsi were little changed in pre-market trading.

Here were the main moves in futures trading ahead of Tuesday’s open:

Here’s were stock futures were in post-market trading Monday evening: