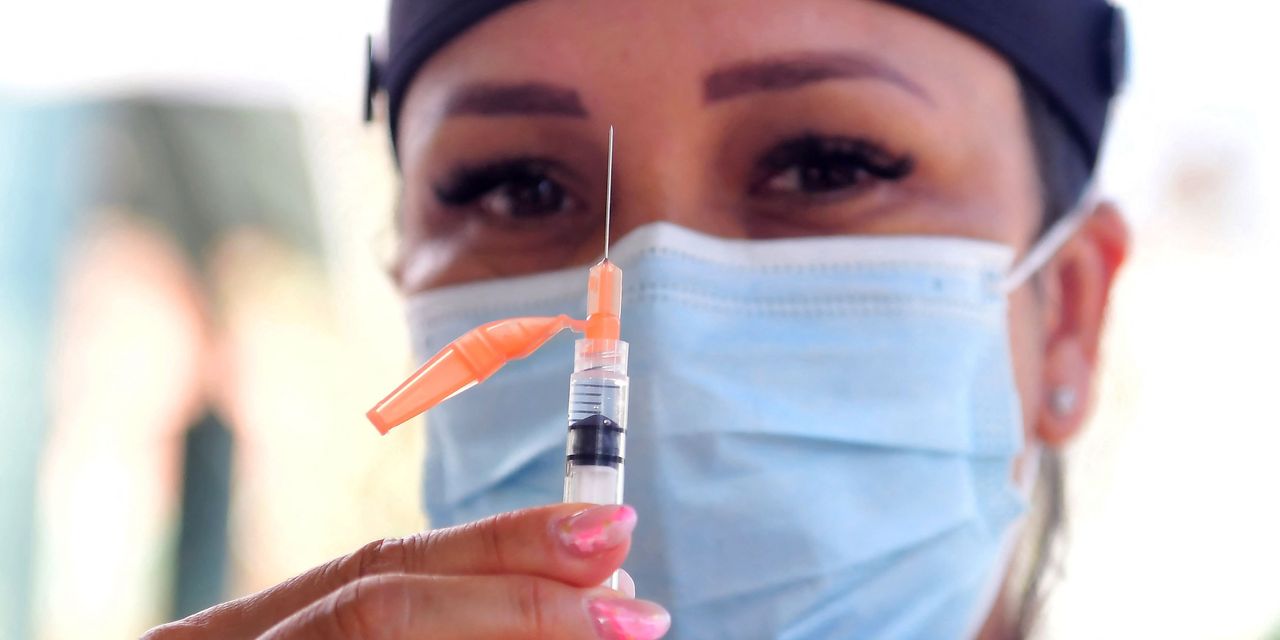 U.S. stock indexes ended higher Friday, with the Dow enjoying a bump from enthusiasm about a breakup of blue-chip component Johnson & Johnson
JNJ,
but the main benchmarks still saw losses for the week.

Stocks have been buffeted by inflation fears, with the government debt yields rising, but overall investors are betting that corporate profits will remain healthy despite supply-chain challenges and a surge in consumer demand in the aftermath of the COVID-19 pandemic.

How did stock benchmarks trade?

Wall Street shook off nagging worries about accelerating inflation, which were highlighted by the U.S. October consumer-price index report on Wednesday.

The degree by which consumers, the linchpin of any healthy economy, are fretting about pricing pressures was reflected in the University of Michigan’s gauge of consumer sentiment, which slid to 66.8 in November, from a final October reading of 71.7, marking the lowest read since 2011.

The consumer-sentiment number was “disappointing” and probably points to “inflation worries,” said Gargi Chaudhuri, BlackRock’s head of iShares investment strategy for the Americas, in a phone interview Friday. But company earnings have remained strong, with “margin growth” being better than expected in the third quarter, she said, meaning businesses have been able “to pass on” some of their higher costs to consumers.

Some key takeaways from the consumer-sentiment report were that household inflation expectations for one-year inflation rose to 4.9%, from 4.8% in October, representing the highest level since the summer of 2008. That’s even as expectations for inflation for the next 5 years held steady at 2.9% above its pre-pandemic level of 2.3%.

“It’s no surprise that Consumer Sentiment took a steep drop given inflation is rising and looks to remain high for the foreseeable future,” Frick wrote in emailed comments on Friday.

“High prices are taking a bite out of spending power, but the effect that will have on the level of spending is probably low given Americans are flush with cash, have months of pent-up demand, and are ramping up spending month after month regardless of inflation fears,” the NFCU economist wrote.

“In fact, the high level of spending on goods is one reason why inflation is so high. Initial forecasts were that spending would switch more to services at this point, which would have less of an effect on inflation, but that hasn’t happened as COVID-19 fears keep the demand for services relatively low,” Frick wrote.

The concerns about inflation come after the year-over-year CPI rose 6.2%, a nearly 31-year high and more than triple the Federal Reserve’s 2% target, with supply-chain bottlenecks and a surge in demand blamed for the run-up in prices.

“But the market is looking out,” said Larry Adam, chief investment officer of Raymond James, in a phone interview Friday. “I think the market has bought into the fact that a lot of these pressures will start to ease as we progress into 2022.”

The Bank for International Settlements predicted this week that bottlenecks should ease and that the direct inflationary effect will likely be limited. That tracks the view of the bond market, where long dated Treasury yields largely remain contained within the ranges of the past few weeks, despite considerable volatility, even though inflation has surged to the highest level in 31 years.

In other economic reports, some 4.4 million people quit their jobs in September, government data from the Job Openings and Labor Turnover Survey, or JOLTS, revealed on Friday, marking a record high for the third month in a row. The quits equate to 3% of the labor force leaving their jobs in that month, which is also the highest level since the government began keeping track in 2000.

The quit rate is “a really strong indicator of the strength of the underlying labor market,” said BlackRock’s Chaudhuri. “People tend to quit jobs when they have a better-paying job option.”

That workers feel they can find other jobs elsewhere is a good thing. “It will take some time for the supply and demand of labor to find a new balance. But the labor market tightness depicted in the JOLTS report should help pull disenfranchised workers back into the labor force in coming months as constraints on the labor supply ease,” wrote Lydia Boussour, lead U.S. economist at Oxford Economics, in a Friday report.

However, the current labor-market dynamic can force companies to scale back production or hours because they cannot obtain enough labor, which can amplify supply-chain and pricing issues, which can threaten the recovery from the COVID-19 pandemic, some strategists say.

BlackRock saw a “meaningful pickup” in capital flowing into “quality” funds during the third quarter, as investors gravitated toward companies more likely to maintain strong and consistent earnings growth despite inflationary pressures, according to Chaudhuri.

The iShares MSCI USA Quality Factor ETF
QUAL
rose almost 1.1% Friday, bringing gains for the year to about 25%, according to FactSet data.

As inflationary concerns persist, “the quality trade is probably still something that is going to garner inflows, much as it did during the third quarter,” she said.

Which companies were in focus?

How did other assets perform?

—Steve Goldstein contributed to this report.