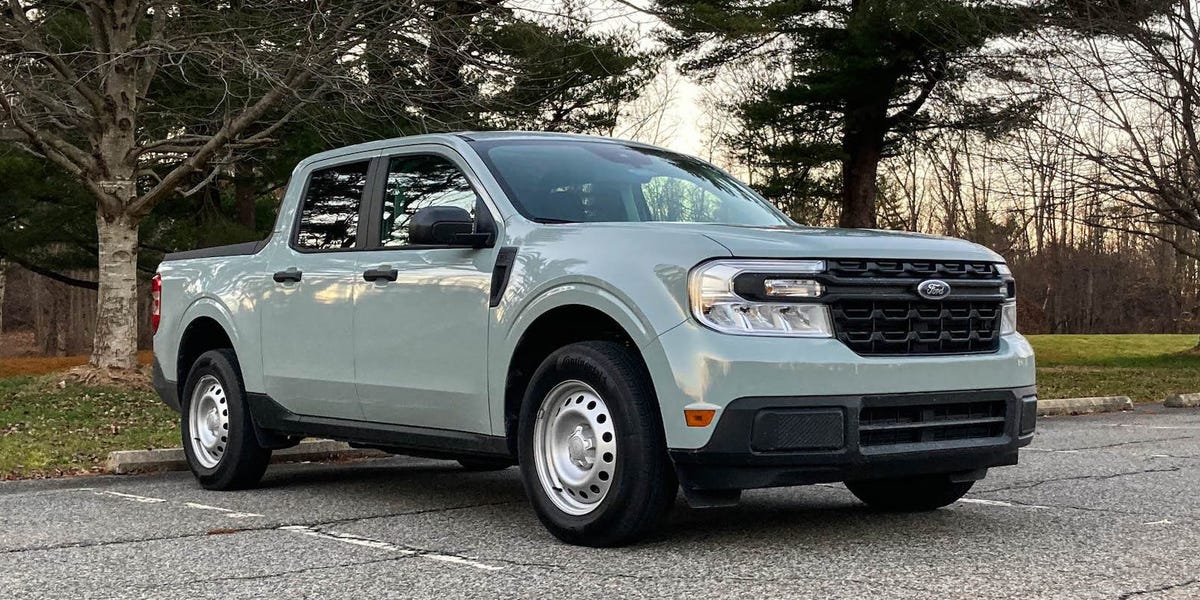 The first time I hopped into the new Ford Maverick pickup, I did what any driver would do in an unfamiliar vehicle. I strapped in, adjusted my seat, and fiddled with the rearview mirror. Then, I went to tweak the side mirrors.

But I didn’t find the usual buttons or joystick on the driver’s side door.

“Strange,” I thought. “There’s got to be a knob here somewhere.” I searched and searched for some way to adjust the mirrors. The knob, I’d soon learn, was me.

I stared blankly at the area by the window switches, certain that the answer was right under my nose. I wondered whether I was being oblivious or just plain stupid.

As it turns out, it was the latter. I rolled down my window, reached out, and gave the driver’s side mirror glass a poke. Sure enough, the Maverick comes with manual mirrors — the kind you have to tilt with your hand to find the right position.

This came as a surprise to me, a person who normally test-drives new cars in the $30,000-plus category. But once I remembered the Maverick’s whole reason for being — to offer buyers a brand-new truck at a bare-bones price — it all made perfect sense.

The 2022 Maverick is Ford’s newest pickup. It aims to provide a more compact and budget-friendly alternative to today’s trucks, which have ballooned in both size and price over the years. The base Maverick XL, which Ford loaned me for a weekend in December, costs $20,000 before fees, which makes it the cheapest model in Ford’s lineup. It’s 200 inches long, roughly the size of a big SUV like the Honda Pilot, but about 1 foot shorter than a midsize pickup like the Ford Ranger.

The Maverick is available in three trim levels, all of which come with a hybrid powertrain and front-wheel drive:

It’s a great option for people who want pickup capability, can’t spend too much, and live in an area where parking isn’t exactly kind to a 20-foot-long Ford F-150. As someone who lives in New York and sometimes needs to carry bulky things like bikes and camping gear, the Maverick is right up my alley and I was eager to try it out for my own selfish reasons. But to own the cheapest version, you need to compromise on more than just mirrors.

During my time with the Maverick XL, I debated whether the stripped-down truck would be worth the sacrifices I’d have to make.

As I drove the Maverick around, the surprises kept coming: The XL trim lacks cruise control. It doesn’t have blind-spot monitoring to help with lane changes. Its bed is made of bare sheet metal without any plastic lining. There’s no push-button start.

The 191-horsepower truck is sluggish getting up to highway speed, and there’s plenty of wind and engine noise once you get there. Its seats aren’t particularly comfy on long drives, and its interior isn’t fancy by any stretch.

But in a lot of ways, the Maverick XL manages to make “cheap” appealing — especially when you remember that it costs only $20,000, less than half the price of the average new car.

The truck’s interior is more pleasant to be in than you might expect from a brand’s bottom model. Instead of the usual hard black plastic everywhere, the Maverick uses fun patterns, textures, and molded pieces that make things interesting. The door pulls are these cool floating rectangles, instead of something plucked from the Ford parts bin. There are plenty of useful storage nooks, including bins under the rear seats. The infotainment system is basic but comes standard with Apple CarPlay and Android Auto.

Outside, the Maverick looks cute and muscular all at the same time — like a miniature F-150 or Tom Holland. And I was a big fan of the XL’s steel wheels, even if they’re a sign of a cheap truck. The Maverick’s 4.5-foot bed is basic but functional, complete with a series of notches meant to accommodate do-it-yourself improvements like bike racks and dividers.

What’s more, the smallish pickup offered good visibility and was easy to maneuver around city streets. Its standard hybrid engine, though underpowered, delivers a stellar 33 miles per gallon on the highway and 42 mpg around town, according to the Environmental Protection Agency.

In its cheapest form, the Maverick exists to drive places, carry people and things, and not much else. It isn’t particularly quick, can’t tow all that much, and leaves out a laundry list of features that many would consider essential. But that may be perfect for some buyers. Whether the bargain-bin price justifies the sacrifices is between you and your wallet.

To me, it feels worth it to spring for a pricier trim and some options. Since the Maverick has such a low base price, you can pile on extras and still get a truck that’s cheaper than most. Adding on all-wheel drive and the more powerful engine, for example, costs about $3,300.

Pickup trucks have gotten bulkier, fancier, and more expensive over the years, and buyers can’t get enough: The F-150 and Chevy Silverado are two of the most popular vehicles on the market, and either truck costs nearly $80,000 fully loaded.

But new entrants like the Maverick and Hyundai Santa Cruz — smaller, cheaper, and more maneuverable than their rivals — show that, sometimes, less really is more. For many buyers, Ford’s little pickup may be all the truck they need.