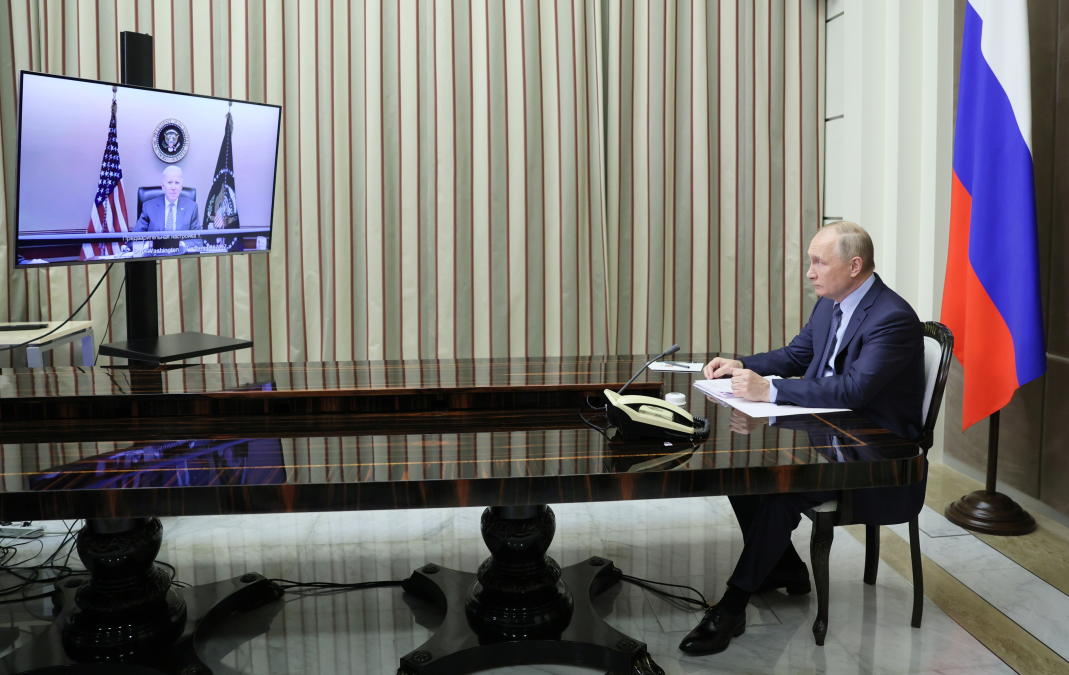 Choppiness in U.S. stocks is expected to persist this week as investors grapple with the prospect of swifter monetary tightening and escalating geopolitical tensions between Russia and Ukraine. And a new read on retail sales will be released Wednesday giving investors more insights into consumer spending.

Concerns over military action by the Kremlin have created a new headwind for investors, particularly after the White House warned on Friday that a possible invasion of Ukraine by Russia could come within days. The statement dealt a fresh blow to markets.

“The Russia-Ukraine tensions have hovered over already shaky investor sentiment,” Comerica Wealth Management Chief Investment Officer John Lynch said in a note. “Investors have been counting on a diplomatic resolution, but recent developments indicate this may be wishful thinking and therefore, not fully priced into the markets.”

The geopolitical tensions add to the uncertainty around central bank policy that has dominated market sentiment in recent months. Friday’s warning by the Biden administration weighed on stocks and sent oil prices soaring to a seven-year high.

“By pushing energy prices even higher, a Russian invasion would likely exacerbate inflation and redouble pressure on the Fed to raise interest rates,” Comerica Bank Chief Economist Bill Adams said in a note. “From the Fed’s perspective, the inflationary effects of a Russian invasion and higher energy prices would likely outweigh the shock’s negative implications for global growth.”

The Fed is already under pressure to act on the fastest increase in prices in 40 years. Wall Street was rattled last week by a highly-anticipated fresh print on the Labor Department’s Consumer Price Index (CPI), which notched a steeper-than-expected 7.5% increase over the year ended January to mark the largest annual jump since 1982. The surge heightened calls for the Federal Reserve to intervene more aggressively than anticipated to rein in soaring price levels, even raising the possibility of an emergency hike before the bank’s next policy meeting in March.

“As the inflation fire burns even hotter, the Federal Reserve will have to bring an even bigger firehose to put it out,” FWDBONDS Chief Economist Chris Rupkey said in a note.

Worries over above-estimated inflation have raised questions about whether or not the central bank might deliver on a 50 basis point move in mid-March. The Fed has not executed a “double” rate increase in a single policy decision since May 2000.

Fed watchers including Goldman Sachs and Deutsche Bank had ramped up their calls on how many times policymakers will increase rates. Goldman now sees the Federal Reserve hiking short-term borrowing costs seven times this year rather than the five it had expected earlier, while Deutsche Bank projects a 50 basis point rate hike in March and five more 25 basis point increases in the year.

CME Group’s FedWatch tool showed investors were pricing in a 99% chance Fed policymakers will raise rates by 50 basis points in March as of Friday, a jump of 24% from the probability reflected two days earlier.

Some experts say the projections are greatly exaggerated.

“Even with elevated levels of inflation, we expect the Federal Reserve to tighten less than the market expects in 2022,” Treasury Partners Chief Investment Officer Richard Saperstein said in a note.

“We do not expect the Federal Reserve to announce rate hikes at every meeting and such extreme tightening scenarios suggest that we’re currently witnessing peak Fed mania,” he wrote, adding a moderate tightening process through a combination of rate hikes and the implementation of quantitative tightening starting this summer were likely.

On the geopolitical front, LPL Financial’s Ryan Detrick also appeared to temper the notion that a move by Russia into Ukraine would crash the stock market, pointing out that, historically, the great majority of geopolitical events going back to World War II did not put much of a dent in equities and losses were typically recovered quickly.

“You can’t minimize what today’s news could mean on that part of the world and the people impacted, but from an investment point of view we need to remember that major geopolitical events historically haven’t moved stocks much,” Detrick said.

As an example, Detrick cited one of the best six-month runs in U.S. stocks ever following the assassination of President John F. Kennedy in November 1963.

“The truth is a solid economy can make up for a lot of sins,” Detrick added.

Consensus economists are expecting to see retail sales, released by the U.S. Census Bureau, rise by 2% in January compared to December’s decrease of 1.9%, but sales excluding autos, gasoline, building materials and food services is expected to rise at a softer 0.8%, according to Bloomberg data. This would compare to December’s decline of 2.3%.

“The mom [month-over-month] gain in retail ex auto was negatively impacted by restaurants and gas spending, which were down 1.7% and 3.8% mom, respectively. As a result, the core control group, which nets out auto, gas, building and restaurants showed a strong 1.9% mom gain,” said BofA Securities in a research note last week. “Keep in mind that the Census retail sales report does not capture services spending other than restaurants spending so the impact on Census Bureau data from the Omicron distortions will be fairly muted.”

Although earnings season is slowly winding down, another docket of corporate results remains underway for investors to weigh against monetary and geopolitical conditions this week.

Retail giant Walmart (WMT) will report fiscal fourth quarter 2021 earnings Thursday before the bell which will provide a fresh look into supply-chain issues as well as consumer spending. Walmart is expected to report adjusted earnings of $1.50 per share on revenue of $151.51 billion for the quarter, according to Bloomberg consensus. U.S. same-store sales is expected to increase 6.1%, ahead of guidance of 5%, for the holiday shopping quarter, according to Bloomberg.

On Capitol Hill, the fate of Federal Reserve Chairman Jerome Powell and a lineup of central bank nominees including Fed governor and vice chair pick Lael Brainard will be in focus as the Senate Banking Committee readies to hold a series of confirmation votes this week.